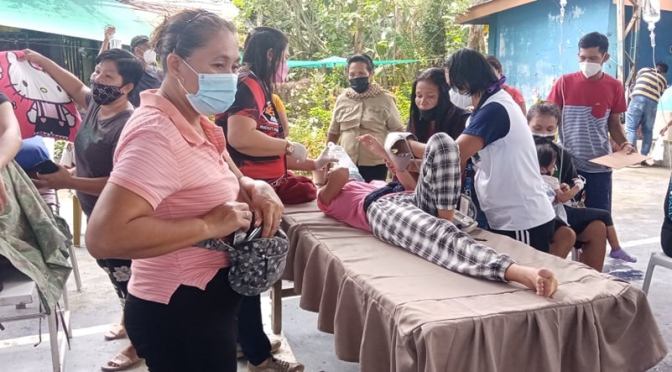 SANTO TOMAS, Davao del Norte (July 18, 2021)—The spurt of diarrhea cases that hit Barangay Tulalian was rising as the municipal government of Santo Tomas logged 124 fresh cases over the weekend, bringing in the total number of diarrhea cases to 295 as of Saturday, July 17.

Municipal Health Officer Dr. June Lim said that residents who fell ill with diarrhea have been forced to leave their homes and decided only to get treatment when their conditions continued to deteriorate.

Lim said that sick patients opted to stay home because they’re hesitant to be sent in a hospital over fear that either they would get or be diagnosed with SARS-CoV-2, the virus causing COVID-19.

But on Sunday, July 18, the MHO said that 11 patients who fell ill with diarrhea did not have the symptom of dehydration. This prompted the Provincial Health Office of Davao del Norte to recommend that patients should be subjected to a reverse transcription-polymerase chain reaction (RT-PCR) to rule out “COVID-19 diarrhea.”

. But Lim said that as early as now, the Santo Tomas LGU is taking a more progressive measures to contain the outbreak in the community such as the strict enforcement of COVID-19 Safety Protocols with Barangay Tulalian COVID-19 Task Force leading the campaign in the community.

As this developed, Mayor Ernesto Evangelista urged the Barangay Tulalian officials to complement the efforts of the Santo Tomas LGU in the ground as the municipal government is facing health issues in two fronts: the diarrhea outbreak and COVID-19 pandemic.

Evangelista also reminded the Barangay Tulalian residents to boil their drinking water to avoid water-borne diseases. The Santo Tomas LGU, he said, began rationing potable water and tap water for household use in the village since Saturday.

Davao del Norte Governor Edwin Jubahib, and the 2nd District Congresman Alan Dujali also provided medicines, bottled water, and other medical and health support for the patients and the medical personnel who were on the frontline of giving health and sanitation services.

Lapiña thanked Governor Jubahib and Congressman Dujali, AquaPure and TADECO for the assistance and support they extended to the efforts and response of the Santo Tomas LGU in dealing with the diarrhea outbreak.

SANTO TOMAS, Davao del Norte (July 17, 2021)—Mayor Ernesto Evangelista declared a diarrhea outbreak on Saturday, July 17, in the wake of the death of two residents of Barangay Tulalian and 47 others, who were confined in public and private hospitals.

Evangelista said the Quick Reaction Team (QRT) was spearheaded by the Municipal Health Office headed by Dr. June P. Lim together with the medical health workers, and the MHO’s Sanitation Team.

The Santo Tomas LGU quickly dispatched two doctors and eight nurses in Barangay Tulalian to assist and provide health and sanitation services to the affected residents.

Evangelista added that the local government has provided potable water to affected areas to ensure the outbreak would not escalate.

According to Municipal Health Officer Dr. June P. Lim, there were 171 residents of Barangay Tulalian who were diagnosed with Acute Diarrhea Secondary to Amoebiasis.

As of Saturday, MHO reported one death so far —a 58-year-old male resident who experienced loose bowel movement, stomach pain and vomiting.

-seven residents were rushed to both private and public hospitals; some are still recovering while others were discharged. Puroks 1, 3, 4, 5, 7, 8, 12, 13, and 15A were identified by the MHO to be the affected areas with 128 households in Barangay Tulalian.

The Barangay Tulalian’s covered court was turned into a makeshift medical facility where severely dehydrated patients—young children and adults— were immediately given first-aid treatment. Inside the covered court were plastics beds arranged in row with affected patients crunching in pain due to stomach pain and vomiting, the usual symptoms of diarrhea.

Charlemagne Fernandez, the MHO Administrator, said the Santo Tomas LGU and the MHO began its investigation to determine what caused the outbreak. But the Environment Sanitation Report from the MHO revealed that the water system source in the area was possibly contaminated because of the water’s poor quality due to poor chlorine disinfection.

Such finding was based on the ocular inspection conducted by the Sanitation Team and random interviews with the Tulalian Water Association (TUWASA) personnel.

Fernandez, however, said the result of the initial probe is not yet conclusive as the official result of the microbiological water analysis is expected to be released on Monday, July 19. Apart from this, Fernandez said the MHO was also waiting for the results of the 15 patients who were subjected to rectal swabbing that would help them determine the bacteria in the patients’ feces.

On Wednesday, July 14, three Barangay Tulalian residents sought medical help in the MHO after they complained of experiencing loose bowel movement, stomach pain and vomiting, the usual symptoms of diarrhea.From three, 16 others visited the MHO the following day Thursday; alarmed with the influx of patients, the MHO immediately visited the barangay and found out that other residents reportedly fell ill with suspected diarrhea believed to have been caused by contaminated drinking water.

As early as Thursday, the MHO had assisted the patients who fell ill as some were recommended for admissions in hospitals for treatment.

This prompted her to take immediate action to save lives and prevent the spread of the diarrhea in the community.

Lapiña said that the Punong Barangay Jeronimo Gumanid Jr. informed her of the situation only Thursday evening when cases were already surging.

Upon instruction of Mayor Ernesto Evangelista, Municipal Administrator Atty. Elisa Evangelista-Lapiña went immediately to the area early Friday, July 16 and brought the QRT personnel from the Municipal Health Office to assess the situation and provide the needed assistance to the affected community.

The Santo Tomas LGU also provided new water containers and water-purification chemicals to the affected areas while residents have been briefed about cleaning their surroundings and maintaining proper sanitation to prevent another outbreak.

To avoid future outbreaks, Lapiña urged the Barangay Tulalian to sit down with TUWASA to discuss on how to improve the water supply in the barangay. She added that the Santo Tomas LGU is readily available to guide and improve water services delivery in the area. 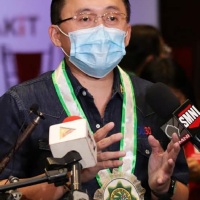 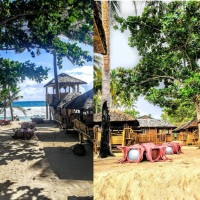 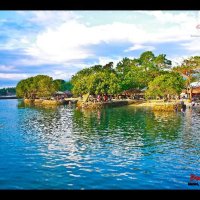