Senator Bong Go announced today, November 30, his withdrawal from the presidential race in the 2022 election.

Go was interviewed during the wreath laying ceremony at the Pinaglabanan Shrine in San Juan for the 158th birth anniversary of Gat Andres Bonifacio, in which the President was invited as guest.

“In the past few days, I realized that my heart and my mind are contradicting my actions. Talagang nagre-resist ang aking katawan, puso, at isipan. Tao lang po ako na nasasaktan at napapagod din,” he added.

Go was running for the presidential seat with the support of no less than President Rodrigo Duterte under the ruling PDP-Laban party.

Chair of the Senate Committee on Health and Demography Christopher “Bong” Go encouraged all eligible Filipinos to get their free COVID-19 shots during the National Vaccination Days to help the government achieve its goal of inoculating an additional 9 million individuals across the country by the start of December.

“Mr. Belgica should stop sowing intrigues that divide forces loyal to the President. He should stop this dirty politics,” Lakas-CMD said in a statement on Saturday.

Political treachery by people that President Rodrigo Duterte, whom he had served for more than two decades, had helped was the reason why Senator Bong Go came to a point of shedding tears in a recent speech.

In the speech, Go, who is running for president in the 2022 elections with the support of Duterte, assailed what he called as “dirty politics” played by the political traitors.

An official of Go’s party, Bishop Grepor “Butch” Belgica, has given hints who these “traitors” are.

“The President helped them with their personal lives. He helped in the burial of his father and (in her) acquittal, ” Belgica, Presidential Adviser for Religious Affairs said in a follow-through statement on Go’s emotional speech.

Go, in the recent speech where he talked about those conspiring against Duterte, did not name names.

They are now conspiring against Duterte, said Belgica.

In 2019, Arroyo thanked Duterte for “providing the atmosphere” that led to the dismissal of the plunder charges against her., said Belgica.

In 2016, despite strong public opposition, less than two months after being elected President, Duterte allowed the burial of the late dictaor at the Libingan ng mga Bayani.

Duterte, chair of theruling Partido Demokratiko Pilipino-Lakas ng Bayan (PDP-Laban), had long expressed that he would like Go to succedd him after his term expires in 2022.

Go has filed his bid to run for president.

Duterte’s choice ofGo as the next President has not impacted on Arroyo and Marcos.

Marcos is running for President, with Davao City Mayor Sara Duterte as his vice president, with the full support of Arroyo and her Lakas-CMD.

This is the very reason why Go turned emotional in a speech and cried “dirty politics, ” said Belgica. 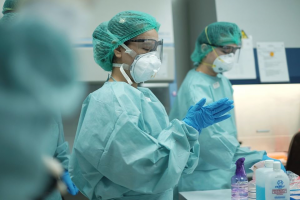 MANILA – President Rodrigo Duterte has instructed the release of additional budget to compensate health care workers (HCWs) who contracted Covid-19 to ensure that those serving on the frontlines will have appropriate benefits and financial support they need while fulfilling their duties,… Read More